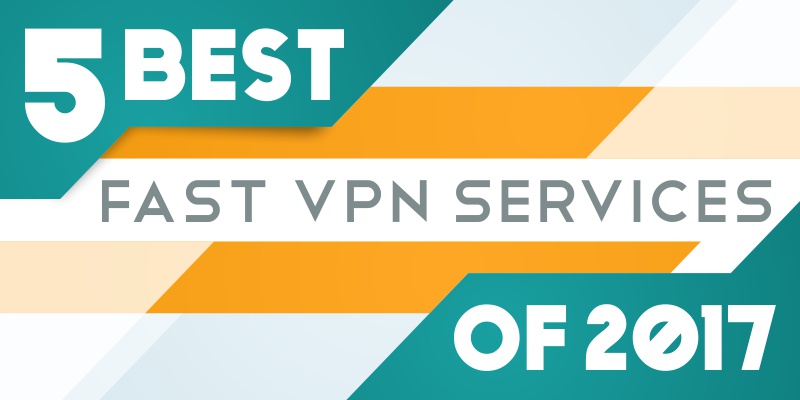 There is nothing worse than experiencing a slow, laggy internet each time you switch on a VPN. While internet privacy and security are of paramount importance, no user should go through the pain of watching videos buffer and websites load at snail speed. This is where you need the fastest VPN service.

But, this is easier said than done. In a market place where you will be overwhelmed with the choices of VPNs at your disposal, many providers will claim to be the fastest. In actuality, such VPN services disappoint and don’t deliver the promised speeds.

To alleviate you from going through this problem, we have come up with a list of 5 fastest VPN services. Each of these VPN services was handpicked by us after comprehensive testing and feedback from real time users.

How Did We Evaluate The Fastest VPN Services?

By gathering our resources in multiple regions, we put the each of the above mentioned VPN providers through different speeds. Our panel of experts then evaluated the performance of these VPNs based on various factors.

Here are the criteria on which the speed tests were evaluated:

We repeated the tests twice for the same region to get an average reading. The results were then tabulated and presented to you, so that selecting the fastest VPN can simple and efficient.

Who Needs a Fast VPN?

There many reasons why you should be using a VPN. But, who really are your average fast VPN users? To answer this question, here are people just like you and me who would need the fastest VPN service:

With millions of cyber threats lurking over the Web, your privacy is in grave danger. A VPN sorts out all the problems posed by such dangers by encrypting your data. But, a privacy conscious user would need impregnable security along with sublime performance. Therefore, a fast VPN is highly important for quick browsing and protection against different cyber threats.

Online streaming has never been as easy as it is in today’s world. Streaming services such as Netflix, Hulu, BBC iPlayer, Pandora and countless others offer unlimited hours of binge watching entertainment, but all require a fast VPN for accessibility. With the fastest VPN, you can enjoy your favorite movie or TV show in high quality without any interruptions.

Experiencing lag and high ping due to server latency is the death of any online gamer. With just few seconds of delay, you could miss that perfect headshot. However a fast VPN service relieves you of this issue. It helps to minimize high ping rates and improve your gameplay by allowing smooth gaming experience.

Just like online streaming, torrent users also crave for blistering internet speeds. Unfortunately, copyright holders are hot on their tail, trying to swoop on anyone who infringes copyrights. Therefore, many VPN service guarantee online anonymity but frustrate users in terms of download and upload speeds they offer while using torrents. This is where a fast VPN service provider comes into the picture. Some fast VPNs are torrent optimized, meaning they offer server dedicated for quick torrenting.

Fastest VPN Protocol – Which One to Use?

One of the many components of a VPN is its protocols. Using these protocols, a VPNkeeps your connection secure and your data safe from privacy breaches. However, not all VPN protocols work fast; different protocols are designed to serve a specific purpose. So, it’s important to get the right balance between speed and security.

With all things said and done, there are certain features of a VPN that you should understand and look for when choosing the fastest VPN. These include:

Ping: when you send out a signal from your device, the time it takes the server to respond to that signal is known as ping. The fastest VPN services are those that provide small ping times.

Upload Speeds: these are the speeds at which you upload data over the internet. Uploads speeds are highly important if you use cloud storage services such as Google Drive or Dropbox.

While there are many VPN services that claim to be the fastest, including the ones we have listed in our post, but you can never be sure to receive the desired performance. Therefore, to help you achieve blistering VPN speeds, check out these hidden tips and tricks:

It is known that a VPN affects your internet speeds as it encrypts and tunnels everything you send/receive over the internet. That maybe the case, but it is not necessary that you experience slow speeds due to a VPN. With the fastest VPN providers, you can easily achieve maximum internet speeds.

The VPN services that are mentioned in our post will offer unprecedented performance, without bogging down your internet connection. You can use them to unlock and stream your favorite media at high speeds and in high quality. You can also use fast VPN to download and upload data, while keeping it safe from cyber criminals.

Do you agree with the fastest VPN providers we have evaluated? Drop us a comment below and share your VPN experience.